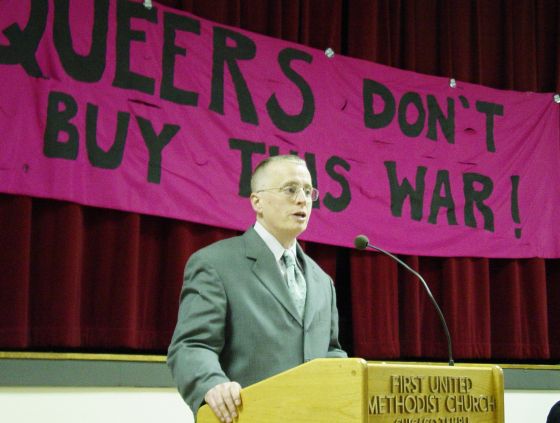 Over the last week, as President Trump brought our country to the brink of out-right war with Iran, I found myself missing a transgender warrior for peace: Leslie Feinberg.

Leslie Feinberg was a transgender writer and organizer who believed that opposing war and imperialism was central to transgender liberation. Thus, Feinberg, who used the gender-neutral pronouns zie/hir, spent much of hir life marching, writing, and mobilizing others against U.S. imperial ventures. Hir legacy can teach trans people a lot about how to work for peace and justice.

Leslie Feinberg said, “I do not believe that our sexuality, gender expression and bodies can be liberated without making a ferocious mobilization against imperialist war and racism an integral part of our struggle.”

Feinberg articulated a radical, Marxist-feminist approach to transgender politics. Zie described hirself as a working-class, and transgender, secular Jewish lesbian socialist. In hir 1992 pamphlet “Transgender Liberation: A Movement Whose Time Has Come,” Feinberg describes the oppression of people who break gender-norms as the result of colonialism and the rise of capitalism. Zie wrote, “The institutionalized bigotry and oppression we face today have not always existed. They arose with the division of society into exploiter and exploited.” Therefore, Feinberg saw opposing all oppression, including war, racism, and ableism, as in the interest of all working class transgender people.

Feinberg believed that by recognizing the interconnected nature of social systems, working-class people from around the world could make common cause together: “Genuine bonds of solidarity can be forged between people who respect each other’s differences and are willing to fight their enemy together….The struggle against intolerable conditions is on the rise around the world. And the militant role of [transgender] women, men and youths in today’s fight-back movement is already helping to shape the future.” Feinberg embodied that dream through hir participation in movements against war and imperialism.

Feinberg’s opposition to the war in Iraq

Feinberg’s work for peace and justice spanned many decades, but hir work against U.S. imperialism in the Middle East is especially instructive now.

Feinberg was a part of the world-wide mass mobilization against George W. Bush’s invasion of Iraq, writing article after article about the war for Worker’s World Magazine and speaking at many different demonstrations. Zie urged hir audiences to see Bush’s foreign policy as a part of larger systems of oppression. You can watch a speech zie gave in 1991 here.

Later, Feinberg reflected on the early years of the George W. Bush administration in an interview with Mattilda Bernstein Sycamore:

Before the war, and just as the war began, we saw hundreds of thousands of people together with millions around the world come out against it. And I think it was a body blow to people who thought that if they came out in large enough numbers and told the government that they didn’t want a war, that the government would not make a war. At this time of military expansion, and the reach of capitalist globalization around the world and the use of the Pentagon to just try to crush and be a boot heel on the necks of anybody who tries to assert their right to self-determination or sovereignty, and at the same time starving the cities, and cutbacks in programs, and people who have to work a couple of lousy jobs and not have healthcare and the repression growing greater and the lack of social liberties—I think that it creates the conditions for a social explosion.

I see that potential for social explosion present still today. If Feinberg were here, I think zie would remind us that it will take organizing – bringing our communities together and finding ways to act together – to make that potential a reality.

Feinberg’s opposition to the Israeli occupation of Palestine

No account of Feinberg’s approach to war and imperialism is complete without describing hir passionate opposition to the Israeli military occupation of Palestine. As both an American and a Jewish person, Feinberg felt a special obligation to support the Palestinian struggle for justice. Zie was particularly concerned by the ways that the US and Israeli governments weaponized human rights frameworks as pretexts for settler colonial and imperial engagement. Zie said, “Today we see how the imperialists — the US to Israelis — use the experiences of women, of gays, of transgenders as pretexts for imperialist war. The white supremacist ideology replaces the colonial claim of ‘bringing civilization, into imperialist claims that they are ‘bringing democracy.” This observation led hir to urge queer and trans people to speak out against efforts to use them as a part of a racist project that did nothing to liberate them.

Feinberg also saw the Israeli occupation of Palestine as related to racism within the United States. In Transgender Warriors zie described a Palestine solidarity rally in the early 1970s where zie saw signs protesting the massacre at Attica prison as well as the Vietnam war: “One banner particularly haunted me: it read Stop the War Against Black America, which made me realize it wasn’t just distant wars that needed opposing.” This early experience shaped Feinberg’s life and activism.

Black trans theorist Che Gossett described the way that Feinberg saw connections between violence at home and abroad: “Leslie saw the connection between domestic racialized warfare in America and US warfare abroad. The linkages between the war on Black and Palestinian life still persist in our time of the afterlife of slavery and the afterlife of the Nakba. In the United States police kill Black “citizens” with impunity — as in the tragic murders of Mike Brown and Eric Garner — Palestinians are criminalized — as in the targeting of Rasmea Odeh — and the two settler states forge relationships of securitization — as in the NYPD in Israel and Israeli and US sharing of carceral technologies and methodologies.”

Today, we are still facing the same problems that Feinberg organized against: unending war, racist repression at home, increased economic insecurity for the working class, and the neoliberal weaponization of queer and trans identity. Looking back at Feinberg’s life, we can see that the strength of our movement comes from organizing at the intersections between multiple systems of oppression. Feinberg’s example can give us inspiration to do just that.

Join us on Patreon to keep articles like this coming!