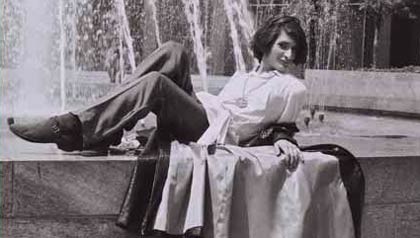 The Stonewall Riots are often described as the beginning of the LGBT movement, but nothing could be further from the truth.  Transgender and queer people have been resisting state violence long before 1968.  Here are five ways that transgender and queer people in New York City supported each other and resisted state violence before the Stonewall Riots.  These forms of community building and self-love formed the political community that made the LGBT movement possible.

Many transgender and queer young people in New York City did not have access to stable housing.  Forced to leave their families or unable able to find work, they sometimes slept on the streets of Greenwich villages and supported each other by sharing resources.  Often they rented hotel rooms and snuck their friends inside.  Sylvia Rivera wrote that after she left home at the age of ten, “I was adopted by a few young (but older than I was) drag queens.  They helped me out . . . Chickie [a friend] lived with her mother in Brooklyn somewhere and she knew that her mother went to work at a certain time, so she’d bring three or four queens home and we’d crash and get out of there before her mother came home.  It was like roaming from house to house.”

Rivera said, “We all stuck together. The police were constantly chasing us.”  Transgender women, drag queens, and street youth could be arrested for a many different crimes related to trans and queer life.  They could be readily accused of loitering, and transgender and gender non-conforming people could be arrested simply for wearing clothes that expressed their gender, under a 1845 New York State statute that made it a crime to “masquerade.”[i] This law effectively put transgender people at risk of arrest at all times.  Transgender and queer people color also endured racial profiling.  Face with constant police harassment, they developed a way to share information quickly.  “We had a code,” explained Rivera.  “If one of the girls or one of the boy hustlers spotted a cop, word was passed down that ‘Lily in blue’ was coming.  This meant we would disappear.”[ii]  Sharing information about police allowed trans and queer people to avoid arrest and keep each other safe.

Sharing resources and information was not the only way that trans and queer people helped each other.  They also relied on each other for a sense of community and family.  For example, Sylvia Rivera and Marsha P. Johnson were very close friends for years before the Stonewall Rebellion.  These friendships allowed trans and queer people to survive and resist together.  They became the basis for the LGBT liberation movement.

Rivera said, “We stood by each other, had each other’s back for many years.  And even back in the days pre-Stonewall, we would sit on 44th Street, a lot of us girls . . .We’d be getting high or something and we’d start talking politics. . . and about when things were going to change for us as human beings.”  This might be my favorite quote from Rivera.  It reminds me of the importance of envisioning the future and doing so with the people you care about.  When I read these words, I wonder where my own conversations with my friends will lead.  Like Rivera, I wonder when things will change for us.

If We Knew Trans History needs your help to keep publishing!  Support the project on patreon!

[i] Robson, Dressing Constitutionally, 125.  The statute originally targeted participants in the Anti-Rent War, a conflict between tenant-farmers and landowners in rural New York.  During the Anti-Rent War, tenants dressed in calico gowns and masks of sheepskin and formed armed resistance groups.  In 1965, the penal codes were recodified and the anti-masquerade prohibition was placed under the title “Offenses against Public order.”  Revisers stated that the law targeted behavior that was “generally unsalutary or unwholesome from a social viewpoint.”