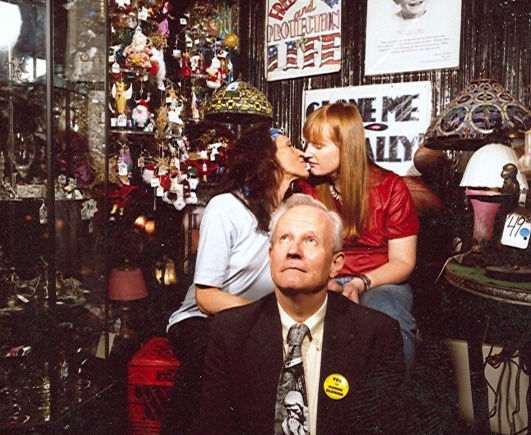 When we talk about transgender people in romantic relationships, often we focus on non-trans partners.  Normalizing cisgender men dating transgender women is one important way to reduce trans-misogynistic violence, but transgender people also deserve to be depicted loving each other.  If we knew trans history, we would know that transgender relationships, both romantic and platonic, can be healing and transformative.  One of the sweetest and most radical love stories of recent history is the relationship between Sylvia Rivera and her life partner Julia Murray.

The story of Sylvia Rivera’s relationship begins with Marsha P. Johnson’s tragic death in 1992.  Johnson was one of Rivera’s closest friends and her loss was devastating for Rivera.  Rivera became homeless and lived on the pier where Johnson died.  Then in 1993, she became a member of Transy House, a home ran by transgender women, patterned after the example of STAR House, the community that Rivera and Johnson started together.  In fact, Chelsea Goodwin, one of the women running the house, was one of Rivera’s trans children who was supported by STAR.

When Rivera moved into Transy House, she was grieving and struggling.  With the support of these community members, she regained her health and decided to stop using drugs and alcohol.  My favorite primary sources about Sylvia Rivera’s life are the home videos that Randy Wicker, a friend of both Rivera and Johnson, made to describe Rivera’s time in Transy House.

In Transy House, Rivera also met Julia Murray, another trans woman.   At the time, Murray was having a mental health crisis, an experience to which Rivera could relate.  Murray did not like to sleep alone and opted to sleep on the run in the living room where Rivera was also staying.  Soon, Rivera offered her bed to Murray and a friendship started.  In February 1999, Rivera and Murray became lovers.

Rivera said of Murray, “I feel that both of us being transgendered, we understand what the other has gone through. We have always been with men, but the men that we have met in our lives haven’t been able to give us the sensitivity that we share between ourselves.”

The community of Transy House provided a space where Rivera could thrive and define herself.  She said, “People now want to call me a lesbian because I’m with Julia, and I say, ‘No. I’m just me. I’m not a lesbian.’ I’m tired of being labeled. I don’t even like the label transgender. I’m tired of living with labels. I just want to be who I am…I will be 50 years old this coming Monday. I don’t need the operation to find my identity. I have found my niche, and I’m happy and content with it. I take my hormones. I’m living the way Sylvia wants to live. I’m not living in the straight world; I’m not living in the gay world; I’m just living in my own world with Julia and my friends.”

Together, Rivera and Murray restarted STAR.  You can listen to Murray and Wicker remember their work in this video.

Murray and Rivera remained together for the rest of Rivera’s life.  Their love, like the deep friendship that Rivera and Johnson shared, was revolutionary.  Trans love deserves to be remembered as an important part of our history.

Did you learn something? Support If We Knew Trans History on Patreon.