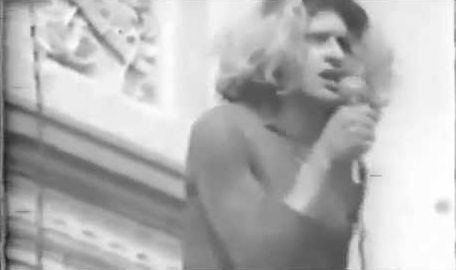 You might not be able to tell, but this month’s Pride celebrations commemorate the Stonewall Riots, a protest against police harassment.  In the wee hours of June 28th, 1969, Black trans woman Marsha P. Johnson threw a shot glass after a cop asked her for her I.D.  That night, the transgender and queer patrons of the Stonewall bar were tired of being hassled, arrested, and beaten by police.  They fought back against the police, with trans women, butch dykes, and drag queens at the front of the riot. Marsha P. Johnson’s friends in the New York City gay liberation movement christened her initial act of defiance, “The shot glass heard around the world.”

Sylvia Rivera, a Puerto Rican trans woman and close friend to Marsha P. Johnson, participated in the Stonewall Riots and led chanting during the first demonstration commemorating them.  She became an important part of the New York City gay liberation movement.  Then, just four years after Stonewall, Rivera, Johnson and other transgender women and drag queens were told that they were no longer welcome at the Christopher Street Liberation Day rally, the gathering that honored the Stonewall Riots.  Lesbian feminists in New York City argued that drag queens and trans women were oppressive toward cisgender women simply by virtue of their gender expression.  Rivera, however, was determined to take part in Christopher Street Liberation Day, whether her participation was welcomed or not.

Rivera fought her way to the stage, grabbed the microphone and spoke about transgender people suffering in prisons.  Her speech remains one of the most electrifying speeches of LGBT history:

I’ve been trying to get up here all day, for your gay brothers and your gay sisters in jail!  They’re writing me every motherfuckin’ week and ask for your help, and you all don’t do a God damn thing for them.  They’ve been beaten up and raped, after they had to spend much of their money in jail to get their self home and try to get their sex change.  The women have tried to fight for their sex changes, or to become women of the women’s liberation. . . But do you do anything for them?  No! . . . {STAR, Rivera and Johnson’s organization, is] trying to do something for all of us and not men and women that belong to a white, middle-class club.  And that’s what y’all belong to.

The crowd booed Rivera.  She was a sex worker, a drug user, a transgender woman with no interest in getting a sex change, a survivor of sexual violence, and a champion of the people who made middle class queer people uncomfortable.  Many queer people saw her as a threat to the civil rights they were just beginning to gain.

The morning after Christopher Street Liberation Day, in despair over being harassed by the people she felt should have been her comrades, Rivera attempted suicide.  Marsha P. Johnson, who happened to return home just in time, saved her life.  Rivera left the movement she helped to star.  It might, however, be more accurate to say that the movement left her, along with the incarcerated transgender women of color and the street youth for which she risked so much.  It was 20 years before Rivera began organizing again.

Jennicet Gutiérrez is an accomplished transgender activist who has dedicated her life to supporting transgender women detained for their immigration status.  Gutiérrez immigrated from Mexico to the United States with her family as a teenager and later became a founding member of La Familia: Trans Queer Liberation Movement.  In 2015, Gutiérrez interrupted President Obama’s speech during a White House Pride celebration.  “President Obama,” she cried out, “Release all LGBTQ immigrants from detention and stop all deportations.”

In response to Gutiérrez’s protest, the crowd of mostly white queer activists shushed her.  Many laughed at her and cheered Obama’s brash silencing of Gutiérrez.  News outlets described Gutiérrez not as a protestor, but a heckler.  Few white queer people seemed to understand that Gutiérrez was the only person in that room celebrating Pride in a way that would make Sylvia Rivera and Marsha P. Johnson proud.

In 2015, the Chicago Pride parade stood still for 17 minutes.  Black queer and trans activists wearing t-shirts with the slogan #BlackOutPride stopped the parade.  In a statement about their action, they explained that they organized the protest to draw attention to the racist policing of gay neighborhoods, gentrification, and other forms of violence directed at queer and trans people of color.  Their intention was to honor the legacy of Marsha P. Johnson, Sylvia Rivera, and other activists of color:

We recount this history to remind ourselves not only that the root of our movement as queer people is the militant resistance of state violence in all its forms, but also that the Pride Parade as a tradition is built on the intentional silencing of the members of our community most impacted by that same violence—trans people, women, people with disabilities and mental illness, Black and Brown folk, indigenous people, immigrants, sex workers and street youth.

Chicago police arrested eight protesters while many people in the crowd cheered for the officers.  “Come on, this is a celebration,” one person yelled at the demonstrators.  Whatever that person was celebrating, it wasn’t the history of Pride or the lives of Black trans women.

Chicago isn’t the only place where white queer people have greeted protests with derision.  Get Equal created a timeline of over 20 examples of queer and trans people disrupting Pride events, often in protest of ongoing racism in the LGBT community.  At many of these demonstrations, white people have urged people of color to shut up and get out of the way.

I offer this history because I believe that white people need to be confronted with the spectacle that is our displays of public racism.  My hope is that we are made uncomfortable by this history.  This June, I’m sure that trans women of color will once by confronted by crowds of white people who wish they would stop protesting.  When they are, I ask white people to turn to our friends and neighbors and urge them to listen.  We need to start interrupting our own community’s violence against trans women of color.

Support this project on Patreon!