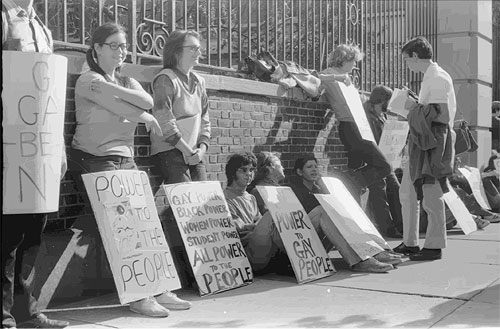 By now you’ve heard that Vice President Mike Pence believes in “conversion therapy” to “cure” LGBT identities.  It’s easy to dismiss him as a religious fanatic, but I’m here to tell you why as a historian, I find his beliefs terrifying.

Medical interventions that later became “conversion therapy” were once enshrined in law:

In the late 1960s, homosexuality and transgender identities were understood as mental illnesses and thus criminalized.  Sodomy was a crime in every state except Illinois.  Twenty states had “sexual psychopath” laws that permitted the detention of homosexuals.  In Pennsylvania and California, LGBT people could be locked up for life.  Many LGBT people were subjected to forced psychiatric interventions, adverse conditioning through electric shocks, castration, sterilization, lobotomies, medical experimentation, and other involuntary procedures.  Atascadera State Hospital in California, gay men convicted of consensual sodomy were subjected to all of these so-called “treatments.”  Stonewall veteran Tommy Lanigan-Schmidt said, “The world was very different then.  Gay people were scheduled for non-existence.  We were supposed to have no reality called gay, homosexual, except to be in a mental institution getting shock treatments or being fired from a job.”  LGBT people were incarcerated in both prisons and hospitals – the medical and criminal-legal system were intertwined.

In New York City, transgender people also risked incarceration and forced medical intervention, even when going to the doctor for routine care.  For example, in 1970 Sylvia Rivera and Arthur Bell published an interview entitled “Chris: Gay Prisoner in Bellevue.”  Chris Thompson, a Black transgender woman, described checking into Bellevue Hospital seeking treatment for asthma, only to be incarcerated and subjected to harassment, racism, involuntary medical intervention, and gender coercion.  Thompson was listed as a psychiatric patient, despite being admitted for respiratory problems, and held for more than three weeks.  Thompson told Rivera and Bell, “I feel that I am a prisoner and have been mistreated.  They claim they are trying to help me but I don’t think they are.  I think they are just bull…just playing with me, just because of my homosexuality, wondering whether I want to have an operation [gender confirmation surgery].” Thompson said a doctor repeatedly asked Thompson unnecessary and invasive questions: “Because of me wanting to be a woman so much, he asked me did I ever have a fear of cutting my penis off.”  This question could indicate that doctors were conflating transgender identity with mental disabilities that involve self-harm.  Doctors threatened to transfer Thompson to the state mental institution, leading Rivera to offer to advocate for Thompson’s freedom.  You can read all of the interview here.

This is the reality that Pence’s ideas, carried to their logical conclusion, would return us to.

What gives me hope: how transgender people resisted medical mistreatment

On October 5th 1970, Marsha P. Johnson, Sylvia Rivera, other members of STAR, and members of the Gay Liberation Front (GLF) picketed outside of Bellevue Hospital.  They demanded an end to electroshock therapy and coercive medical interventions aimed at changing the identities of LGBT patients.  Rivera held a sign reading “Community Control of Bellevue.”  They reiterated the demands of earlier LGBT protests for “(1) An end to the oppression of homosexuals and all people in Bellevue Psychiatric Prison – the end of shock treatment, drugs, imprisonment, and metal poisoning.  (2) Free medical care, dental care, and preventive medicine under community control, including free abortions controlled by community women, with no forced abortions and no forced sterilization.”

The protest at Bellevue was one of STAR’s first demonstrations – and not the last to target hospitals.  STAR and the Gay Activist Alliance, another New York City gay liberation organization, co-sponsored a march on Wards Island State Hospital, this time to support Johnson, who was locked inside.  They held a “candle vigil” to call for Johnson’s release and to protest “the treatment of gay sisters in hospitals and prisons.”  Later, after she was released, Johnson returned the solidarity extended to her by marching with a sign reading “Free Our Half Sister Bambi,” in support of STAR member Bambi L’Amour.  These demonstrations reflected two of STAR’s central beliefs: first, that LGBT people held against their will in hospitals were prisoners and should be freed alongside LGBT people held in jails and prisons; and second, that LGBT people deserved free access and community control over medical resources.  Their demands were articulated by Gay Youth, another New York City organization, in their 1972 Gay Youth Rights Platform:

Therefore, we demand the immediate release of all gay juvenile sisters and brothers involuntarily incarcerated in mental institutions due solely to their sexual preferences.  We further demand that brothers and sisters desiring counseling for mental and emotional problems as a result of oppression sickness because of society and its repressive attitudes, be given proper counseling without the attempt to “cure” them of their sexuality.

Through the concept of “oppression sickness” Gay Youth argued that experiences of heterosexism produce disabilities.  This insight created more than an alliance between LGBT people and people with disabilities.  Disability politics, while not named as such, were an integral part of the New York City LGBT liberation struggle.

Back to today: LGBT Resistance to Pence

Because of LGBT activism, in 1973 homosexuality was removed from the DSM, although transgender identities remained classified as a mental illness.  Attempts to cure homosexuality are now regarded as unethical by the American Psychiatric Association.  “Conversion therapy” practiced today is still abuse, but it is generally not medicalized or enshrined into law.  It is difficult to believe that the APA will reverse its stance on homosexuality, but there are a wide variety of ways that Pence can harm LGBT people, especially youth, through conversation therapy programs.  When it comes to his policies, we should be worried, but we should also know that we can resist and survive.

Support me on Patreon!